How was the Dutch Wargaming Convention this year, with the specter of last year’s Covid still in the back of our heads? Is wargaming alive? What’s new? I went out to see. 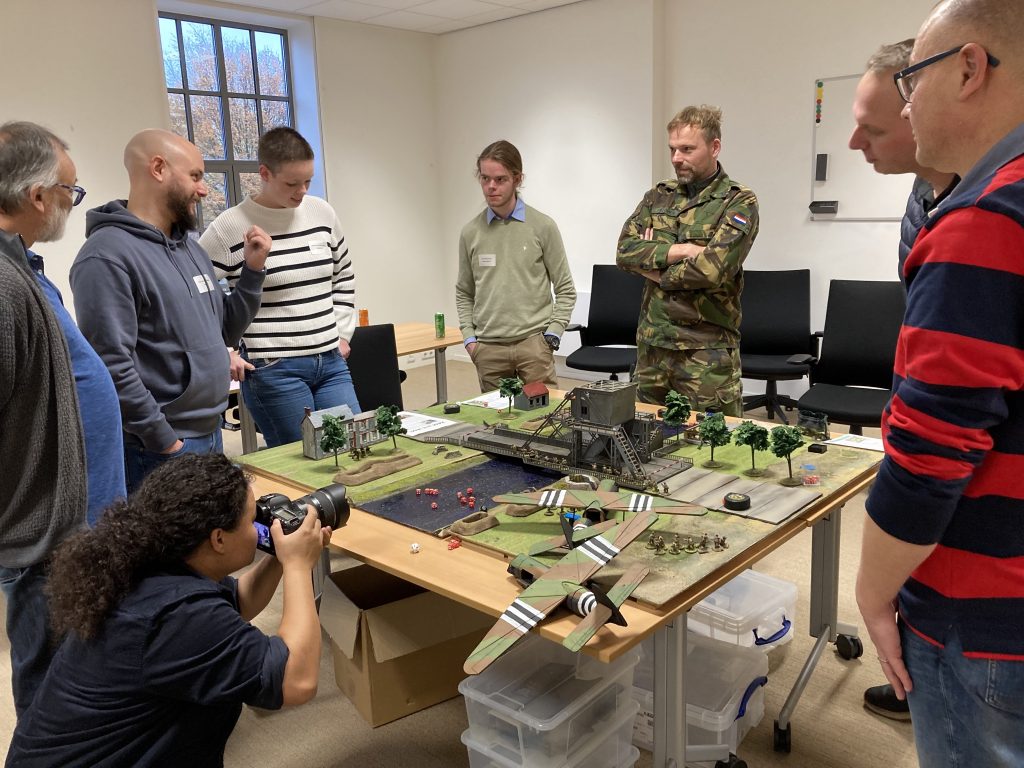 One of the innovations of last year, to use a Dutch military location as the venue, was repeated. Which was a good thing. More military people are present as they are co-hosting, the atmosphere is more fitting, catering is good, and costs are reduced. Personally I do have to get used to military time – being early is in time, being late is not in question -, but then I may be jokingly referred to as one of those Nukubu’s (useless civilians).

Another innovation kept was the quick dive into gaming, which was also good, albeit that there seemed to be fewer new games than the year before. The were a few positive outliers for me though. One was a matrix game about the economic and social mess in Mali, and how to operate in such a difficult situation with all sort of paramilitary groups involved. One of he designers joined last minute, and I think it was a boon. Another one was Bello Ludi table, which may not have been new, but which was a joy to see. Players surrounded four tables joined, with dozens of painted models and a mock up of Pegasus Bridge during D-day in World War II. One side played the British paratroopers who had to quickly occupy the bridge, and were led by a NATO professional. The others, led by an actual lieutenant colonel of the Dutch Armed Forces – in uniform -, played the Germans, and had to stop them. The latter had a noticeably hard time as his team was pushed back, his dice rolls failed, and his commander got stuck too far from his troops to use his command capabilities. It was great to see how immersed he was in the game. It was a bit like the real thing, except – less deadly. And that’s exactly what makes wargaming so powerful. It is a practicing ground which costs no lives and almost no equipment, but which teaches you a lot about the real thing. No matter how much it may look like girls and boys playing with toys.

Malign: How to do a Fake News campaign – in a game

There were three keynotes. The main one, and the most engaging, was by game designer Sebastian Bae, who works in the US defense community. His talk was inspiring and smooth – perhaps even too smooth – and he showed us their latest game on warfare through propaganda, covert action, fake news and cyber attacks in the more social, soft domain. With this game, called Malign, they try to model the effects of such psy-ops campaigns and moreover educate the players about them. Bae addressed some good issues in the game design, the need to keep things simple, whether or not to use a real world scenario, and how to allow players to enrich the experience. Later on the day I joined in a demo of Malign, led by Bae himself. He is an animated facilitator, and he helped the game flow well. Also, the basic concept fared well, and it’s fairly easy to learn to play. But as a game it fell short for me, and it needs work. There was little player interaction except with the direct neighbours, it is rather dependent on your real life understanding of the subject to make up convincing stories -which is a key object of the game -, and the winning conditions seemed nigh unattainable. It is a good conversation starter though, and especially if an expert in the field is available it would make a great learning tool, for example for politicians and civil servants.

A second keynote was by one of the directors of Friesland Campina, about their use of wargames in their strategy sessions. They used a special form of red teaming, where they would envision a competitor’s advantages and try to find strategies for Campina to counter these advantages. He was very positive about this type of exercise, and they made it a main part of their strategy planning. Although it may not be new, it is good to see that war games have a much wider application than just for the military. That should be more visible for the business world.

War gaming in the Dutch Military

War games do belong in the military too, they even originated in the Prussian army in the early 1800’s. But they are having a hard time in getting recognised by the army, internationally, but also in the Netherlands and in Belgium. Lt Colonel Wassenaar spoke about a hopeful first step in this regard. At least one person has now been appointed by the defence organisation to deal with war gaming full time. That is good, as one is a beginning. The task set however is maybe not the easiest: to integrate existing simulation systems with war gaming. And here simulation systems are meant to be expensive digital equipment, simulators and extensive computer programs. Simulation systems, he explained, are meant to practice certain skill sets, whereas war games are used to explore conflict scenarios which could happen in real life, with active, unpredictable human opponents.

Their challenge: make the two work together.

Personally, I have some doubts about the way they were seemingly supposed to do this – by taking the simulators as a starting point. War games are much cheaper to set up, and therefor quicker to explore new tactics and ideas. They are also often simpler, to make it easier to grasp basic tactical and strategic concepts, while your mind is not cluttered with all sorts of technical – though realistic – detail. Simple, existing (computer or board) games could be used to try out a lot, and “fail faster” as game designers say nowadays. Then, once you have new working concepts, you can always go to the expensive simulation systems and see if your concepts still hold out.

So I wish them the best on their quest, and cheer that at least the first war game employee in the Dutch military is there!

All in all I was happy I went to this years event. The networking was good, and I took away a few new insights. But there are also a few things left to think about. The conference was good and simple, but perhaps less enthusiastic than some years before, and a bit stilted. Some of the best stories I only heard in private conversations during drinks afterward. How great would a talk on “In theatre war gaming” be, to hear about how the US military in fact currently do deploy war gaming even during their operations? Or how about the in retrospect disturbingly predictive geopolitical simulations of the Ukraine theatre? How would you like to hear about these things? I would.

Also, some of the best Connections NL editions had a second day with a long wargaming experience, or at least a networking dinner. This year there were colleagues from Belgium who would have loved to stay longer too. Joining hands to have a longer, richer and perhaps even bigger event with a wider target audience could work. And that might be really cool.

And then one last thing. Hate to say it, but Covid may also have had a few tiny good points. It gave us some of the most accessible international conventions: ONLINE. Connections OZ down South was one of them, with speakers from all over the globe sharing their experience, wisdoms, successes and failures. I miss that. Connections NL, could you give that a thought too?