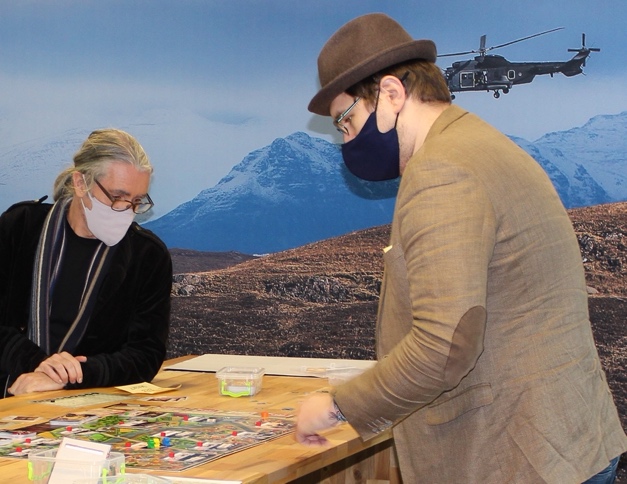 Can wargames be sexy, insightful and commercial at the same time? This is one of the questions I saw at least partly answered at this year’s Connections NL. They can. And even with an impending lockdown one can have an inspiring Connections with lots of game play.

Finding any Serious Games meeting sponsored by SAGANET can be like a puzzle game in itself. For me it was no different this time. With help of Google I arrived at the old, now locked entrance of the Johan Linzel complex. So I had to walk half a mile to find the actual entrance. Then I had to bluff my way into the military facility because I registered so late that I was not on the guest list. It must have been my green eyes, and probably the foresight of the Connections organisation that I was let in anyway – just in time for the introduction held by Hans Steensma.

“What we want this time, is less death by Powerpoint, and more playing games,” he said. And that was exactly what we went on to do.

There was a speech by Lt. Col. Willemen about the launch of the Dutch branch of Fight Club UK. It is a military simulation network where civilian gamers and military join to play wargames such as Flashpoint, and learn as many lessons as they can. Sven Stoop surprised friend and foe with a prize and speech to celebrate ten years Connections. And in the closing talks there were some inspiring thoughts by several people on the current use of wargames by the defense community. One of the lessons being that the military only tend to think in terms of hard (kinetic) conflict and ignore other factors. Wargames can help in better understanding hybrid warfare, with cyber attacks, manipulation of social media and other asymmetric elements. 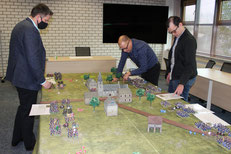 But most of the meeting was spent in two rounds of playing games, with almost ten different choices to go to. There were matrix games, board games in different stages of development, and student projects. TNO gave a taste of their GCAM game about the difficulties of recovering a country from war. What happens when different players try to stabilize the country, or instead just try to sneakily get rich and powerful out of the situation? Lecturer and author Natalia Woitowicz demonstrated her fast pace game Belarus 20, dealing with the recent uprising in that country. Peter van Dop had his BelloLudi decision game, to train participants in taking collective decisions in a competitive environment. There also were some tables with classic war games, and I myself participated in two board games in development.

The first was Orange shall Overcome, a cooperative game in the last successful phase of a Kickstarter. In it you play Dutch resistance members in the Second World War, and try to stay out of the hands of the Nazi oppressor. We only tasted the game, and what I liked was the evocative artwork and the historic detail. It also has a strong oppressive feel of the police and German military watching your every step. That is good. On the down side the game felt as a bit too complex to my taste, but that could be a learning curve. Fun was that designer Marcel Kohler himself demonstrated the game and shared his experiences running a Kickstarter. “What really helps is to have someone to help you financially up front”, he explained, “because the artwork alone cost well over ten thousand euros”. You can still pledge, and the game should be out in stores halfway through 2022. 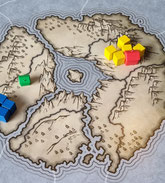 The second game, Einherjar by Diederik Stolk and Reinier Hattink, was in an earlier phase of development, and much more of a beer and pretzel game. In it you play Viking lords vying for control of an island empire. A nice innovation in it was the variable initiative, where you as a player can control when you go in a turn. The game has little pretence to be a real “serious game”, but – given a little more development – I think it could become a great alternative for games like Risk. And while playing you might even learn something on the side.

In all, I liked the hands-on let’s play and learn approach of this year’s event. Despite the impending lockdown, and an almost empty military complex because of Covid there were many attendants. There were around forty people anyway, including some eight or so SAGANET members. Afterward we had drinks and made many inspiring connections.